Back in June 2017 the OpenStreetMap Carto style (which German style is based on) finaly made the change to a hstore based PostgreSQL backend (a key value store, well suited for OSM tags).

I have been using hstore in German style for many years now and went even further by eliminating all columns in the database tables which represent an individual key.

Especially the decision to keep name in a different column than localized names (name:* tags are kept in hstore) is not well suited for localization, one of the main features of German style.

For this reason German style still uses a slightly different database schema which can however be made fully compatible to upstream using the database views available in our Github repository.

At Karlsruhe Hack Weekend in October I also updated the l10n code to make it possible to use them with an unaltered upstream database schema as an alternative. See l10 repository on Github for details.

I still recommend using using the German style schema though.

The Github repository does also contain a l10n only branch of Openstreetmap Carto which is an exact copy of upstream with the notable exception of localized labels in any desired latin character based language.

Because of the new Lua based transformation functions that upstream uses since Carto 4.x (the hstore based branch) I had to do a database reimport on our German tileserver as well, despite the fact, that I have been using hstore ever since. 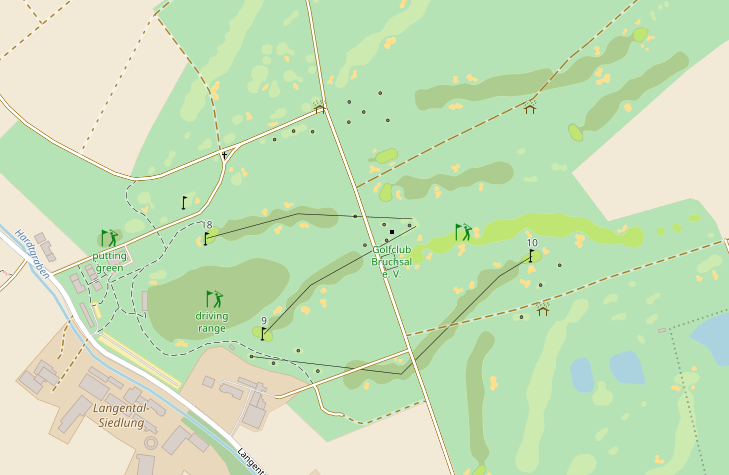 I took the chance to go for --hstore option instead of --hstore-match-only which will allow for rendering of any tag used in osm, as exotic it will be. One example of such a thing is the now active rendering of the golf tag taken from french carto style (see screenshot above).

A few other changes include the adaption of road colors to be more close to the ones used in upstream and a few minor improvements like rendering of the infamous Dönertier instead of Hamburgers on Döner fast-food restaurants very common in Germany (see screenshot below).

I still hope to get one or two people to support maintenance of this fork as keeping it current with upstream will always require a little bit of work! Please contact me if you like to help.

At the time of writing http://tile.openstreetmap.de/ is in sync to the current version of upstream Carto style which is v4.4.0.